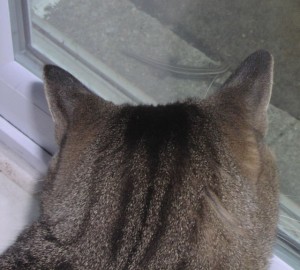 Cat says: Lizard watching is better than the Olympics.  To each his own…

This week is hosted by Wheatstate Celiac and the food is tofu.  Since I’m allergic, it’s not on the menu.

I have an un-plan for this week. I’ve had more and more stomach discomfort for the past week, and no matter what I ate, my stomach would hurt or I’d get nauseous. This happens on and off, usually with stress, and generally it goes away after a few weeks.  And yes, I’ve done the conventional doc and alternative medicine route.  Then I had one of those light bulb moments. Why, exactly, am I continuing to eat when it causes discomfort? So I fasted for most of day, and now am having blended veggies, coconut water and broth and I must say, my GI tract is much, much happier. I can’t believe that in the last 4 or 5 years that never occurred to me before!  I do make a point of eating mindfully, but usually, I feel that *of course* I have to eat. But now I’m leaving it up to my body for the next few days. I am feeling better and so I will probably start more typical food soon, but I’m making a point to plan NOT to plan. It feels really liberating to not have to follow any rules about making something because it’s dinnertime. Fortunately, DH is out of town, so I’m free to eat as strangely as I please.  😆 It’s not in any way a long term solution, but it’s nice to find another way of approaching the situation.

But since DH is away, I hope I’ll be making some of the things that he’s not really a fan of in his absence:

I’ll also be doing a remake of Ricki’s Spicy Cauliflower soup for Adopt a GF blogger, since my camera ate the last round of pictures.  At least someone in this house currently has a healthy appetite! 😎

So instead of a real meal plan, feast on a roundup of GF news.  As a dietitian and someone who is GF, I’m always immersed in the GF world of events.

There’s new research by Dr. Fasano on where and how gluten causes damage in the intestines of people with Celiac Disease. Here’s an article summarizing the findings.

The rules, they are a changin’

In the past, traveling abroad poses some challenges, since many countries follow guidelines known as the Codex Alimentarius, which defines under 200ppm as gluten free (most experts in this country recommend under 20 ppm). However, it’s been reported that they’ve decided to lower their limit to 20 ppm.

Canada has become more proactive as well, and has announced new proposed regulations that all gluten sources must be labeled.

Speaking of the new limit, the official ruling on what can, and can’t, be labeled GF in the US is due out in August, 2008, so stay tuned! However, unlike Canada and abroad, in the US the new ruling is ONLY voluntary. Essentially, if a company wants to label something as GF, they must comply with the rules, but most of our food supply will still not be required to have gluten information on the label.

Triumph Dining is giving away their dining cards. But it gets even better! If enough people take them up on it, they’ll donate to a Celiac related charity.

Good news for multi-allergic chocolate lovers! Enjoy life has new gluten/dairy/soy/nut free chocolate bars that will be at Whole Foods in August. There’s even a crispy rice bar!

Heartland’s finest has closed!  If you are a fan of their pasta or Cereos, you’ll have to act quickly to stock up.  Allergygrocer has some in stock, and you may be able to find in other places, too.

We’re seeing GF recipes in the mainstream more and more! Emeril had a recent episode, with recipes that are gluten free, dairy free, egg free and nut free! The included a brownie, wraps and more.

And, of course, Adopt a GF blogger for July is coming to a close, so please send me your pictures and links.

Life played a funny trick on me. I've studied nutrition for years, and much to my surprise, found out that I could manage many of my health issues via diet. I've been GF for years, and I've got a bunch of allergies and sensitivities. But it definitely doesn't keep me from cooking, baking and enjoying my food. Thanks for stopping by.
View all posts by Cheryl Harris →
This entry was posted in menu plan, news. Bookmark the permalink.