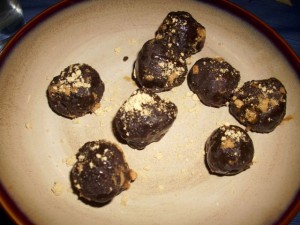 I love these babies. I’ve made them for a while, and finally wrote down the recipe…only to lose it in the shuffle of a kitchen remodel. But no worries! The new, improved version is even yummier (I think). So check out these gluten/dairy/egg/soy/corn/sugar/caffeine free vegan babies and know that no matter what you can eat, there’s always a way to make life very tasty.

Chestnuts are awesome. They give a wonderful moist creamy feel to the treats, and using the pre-peeled ones makes it super easy. I just will have to remember to stock up to have them all year long!

The balls do taste chocolat-y, especially if you add the chocolate liquor. Or if you aren’t avoiding chocolate, rolling them in cocoa powder or adding an ounce of melted cocoa mass instead of the cashew butter makes someone’s brain think chocolate. But carob has a lovely flavor of its own that I appreciate it best for what it is, rather than trying to make it into something it isn’t (i.e. pretending it’s chocolate)

Blend chestnuts, brazil nuts and cashew butter until they are mostly ground down, then add the agave and coconut oil until you get a nice smooth paste. Add in the rest of the ingredients, pulse until well blended. Scoop into a bowl, chill for 30-60 min. Roll in powdered sugar, powdered coconut sugar, cocoa powder or a mix.

Mmmm. They keep well, but I’ve rarely tested that out.

Life played a funny trick on me. I've studied nutrition for years, and much to my surprise, found out that I could manage many of my health issues via diet. I've been GF for years, and I've got a bunch of allergies and sensitivities. But it definitely doesn't keep me from cooking, baking and enjoying my food. Thanks for stopping by.
View all posts by Cheryl Harris →
This entry was posted in dessert, recipe and tagged corn free, dairy free, egg free, gluten free, low glycemic, no amylose, soy free, sugar free, vegan. Bookmark the permalink.