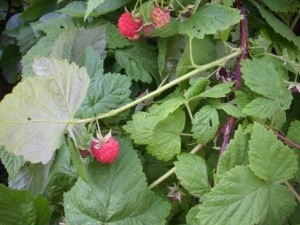 I love raspberries, and I didn’t know it for years. It was only once I grew them that I realized that, in fact, they’re awesome. I grew them for DH, now most of them make it to my mouth. We’ve finally gotten enough canes to have a nice big crop, so there’s plenty to go around. And it works beautifully, really. It’s so nice to go outside and be able to have some luscious berries! The birds have not yet pillaged; I’m crossing my fingers that they just somehow don’t notice. I do cover the canes with tulle, but it doesn’t work that well when they’re sufficiently motivated.

This week I posted a roundup of recipes for Sea’s Yum-e-baby shower. Check it out and wish the new momma to be good luck!

I’ve also posted “Gluten Free on the Go“, this month’s edition of my GF newsletter. I’m holding a class on Healthy GF eating on June 27th, so if you’re in the area, you should come! Much fun will be had by all.

Also, pretty please sign up to host Menu Plan Mondays! I do love seeing all of the menus, and would love more host/hostesses. Just drop me a line at cheryl (at) eharrishome (dot) com.

Weds:
Chicken in a minty sauce with asparagus (if I can find some!!!)

Baked good:
I’m testing one of Sally’s recipes, and I’m sure it’ll be a winner! I’ll post more when I can.
Chickpea crackers

Sea of Book of Yum checks in with an ambitious menu, especially considering she’s in her 3rd trimester (yay Sea!).  She shares an adapted recipe for cornbread madeleines.  I love the idea of a red pepper version!

Esther shares a picture of her adorable little munchkin.  She loves raspberries, but they’re not quite in season yet over the other side of the pond.  However, she still had a great day of berry picking!  She’s got a lot of rhubarb-rich recipes on the menu, and I’d love to hear how they turn out.

Kim has been out of town for a few weeks for a fun trip with her family and so she’s trying to reorient herself.  She’s got a great menu planned, including Thai Chili salmon, which sounds incredible.

Wendy of Celiacs in the house tempts us greatly with the strawberry tart.  How can you go wrong there?  and she points out that as long as something is delicious, we should be able to go free form and not worry about jagged edges.  Hear, hear!

Heather joins us with a berry fruit salad for Father’s day, which sounds yummy.  And do check out her past entries for Sea’s Shower, they are just about the cutest things I’ve seen!

Elizabeth has a nice article on almost meatless meals on her site.  I love the idea, money wise, health wise and environment wise.  As always, she has a varied international menu planned.