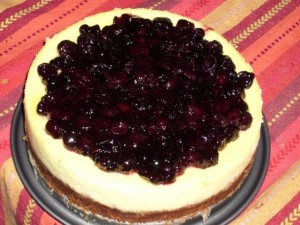 The April 2009 challenge is hosted by Jenny from Jenny Bakes. She has chosen Abbey’s Infamous Cheesecake as

Now, cheesecake used to be my favorite food.  Without dairy or soy, it just wouldn’t be right.  So I opted to make cheesecake for the masses and just liberate the crust of gluten, and do a simple ground almond crust with a hint of cinnamon.  And boy did I have a good time.  One 7 inch blueberry cheesecake, 1 little blueberry, 1 mini praline cheesecake, and 1 mini chocolate swirl, too.

The recipe was super simple.  It’s amazing that I’ve forgotten what cheesecake batter looks like, and each time I do it, I’m reminded why I swear I’m done with recipes that require a waterbath.  Especially since the mini-cheesecakes required a mini waterbath, and had to cool down in the toaster so that the big one could bake longer…it was a big of a logistical mess, but worked out surprisingly well.

Do check out the blogroll to see what everyone else came up with.  It’s hard to go wrong with cheesecake. 😎 And, of course, I can’t wait to see what’s in store for next month.

Life played a funny trick on me. I've studied nutrition for years, and much to my surprise, found out that I could manage many of my health issues via diet. I've been GF for years, and I've got a bunch of allergies and sensitivities. But it definitely doesn't keep me from cooking, baking and enjoying my food. Thanks for stopping by.
View all posts by Cheryl Harris →
This entry was posted in daring bakers, dessert. Bookmark the permalink.