Baking up a storm… 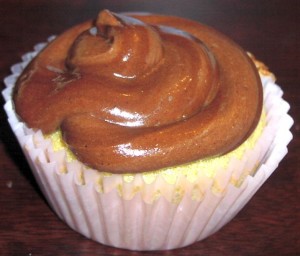 Generally, I like adventuring in the baking world.  Yep, I have my share of failures, but I get the chance to be creative, and it’s so exciting when things DO work!  But as of late, I’ve been making more recipes from other sources, which has been quite fun in a different way.

Ricki, from Diet Dessert and Dogs, is putting out a cookbook soon called Sweet Freedom.  There’s a sneak preview here. I really like Ricki’s writing and cooking style.  Some of the recipes are gluten free, and all are vegan, use whole grains and avoid refined sugars.  Ricki’s been kind enough to let me be a “recipe tester”, which has been great fun.  How cool is it to “have to” make yummy recipes?  I know, twist my arm.  Just check out this Gluten Free, sugar free, soy free buttercream frosting…AND since it’s a vegan cookbook, that means no dairy or eggs, either. There are 2 versions of it there, and no, I wouldn’t recommend licking the screen.  Oh my goodness this was so unbelievably creamy.  And there will be more pictures to come in the next few weeks…

I made Ricki’s Easiest Almond cookies, which are super easy and tasty, and can be whipped up in just a few minutes with minimal cleanup (yay!).

I’ve also made gluten free versions of her Sunshine Breakfast loaf AND her chocolate mint cookies. The breakfast loaf features pumpkin, and disappeared at the speed of light in a room of

gluten eaters. The chocolate mint cookies never made it out of the house because DH hoarded them. I really can’t blame him!

If that wasn’t enough cooking for ya, I just received an advance copy of Carol Fenster’s 1000 Gluten Recipes, and so of course I had to try some of the recipes to see if they’re good!  The book is ginormous.  It’s like a GF version “Joy of Cooking”, which is pretty cool.  I stuck with the basics and made yellow cupcakes, which are the ones with Ricki’s luscious frosting.  DH loved them and wanted to know if they had gluten. Um, hello? Do I make anything with gluten? Suffice to say they were indistinguishable. However, I was a little disappointed.  I LOVE her book, Cooking Free.  I mean,

lovelovelovelove.  It is the book I recommend most to people with multiple allergies.  And considering that so many folks have multiple intolerances, I was surprised and a little disappointed that she didn’t have more than a handful of vegan or allergen friendly foods, especially since she’s clearly so gifted at it. There are dairy free variations (i.e. use Earthbalance rather than butter), but that’s pretty much the extent of it.   However, if you’re looking for a book of GF basics, this is it, and I’ve never seen one so comprehensive. It’ll make an excellent holiday gift for someone you love (including yourself, of course), and it will certainly be a “go-to” standard.

Here’s some more info on Carol and her books. 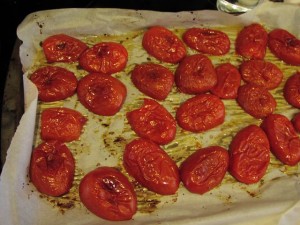 And food? I made some of that, too, but you know, cabbage just isn’t sexy the same way frosting is. But I also made super yummy slow roasted tomatoes.  I only like tomatoes in season, so I keep making batches with the intent to freeze them and alas, most end up in my tummy.  But oh, they are incredible. Since we’re saying goodbye to tomatoes for the season, this is my last hurrah on that front.

5 Responses to Baking up a storm…