Peaches and spice and all things yum… 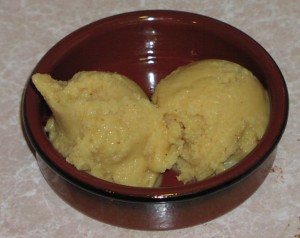 I planned to make a simple peaches and cream ice cream as a fun raw recipe for July Go Ahead, Honey, It’s GF “UNCOOKING” edition, but the fates had something more interesting in mind.

It was a bit of a comedy of errors. My first two recipe attempts–banana macadamia candies– were okay, but underwhelming, and time was running out. So I decided to go for one more attempt, peach ice cream, and as usual, I figured I could could wing it. I used young coconuts for a creamy texture, and blended in a few peaches, but you could barely taste them. Coconut milk is wonderfully creamy, but it takes a strong flavor, like chocolate, mint, berries, etc. to mask it. So I hastily ran out to the Farmer’s market, and pureed some more peaches. You could taste the peach, but still it wasn’t prominent.

Hmmm. So I had a vat of yummy, peach goop, and I needed inspiration. Pecans? Extracts? And then I realized, of course! Crystallized ginger.

The ginger and peach pairing worked really well, with the sweetness balancing the sharpness of the ginger. I would make vanilla ice cream again, and have chunks of peaches, but I wouldn’t do peaches by themselves again. I would try it with pineapple or banana in the future, and will certainly tinker with this recipe again!

You live, you learn. May all my “mistakes” be this yummy!

Makes a batch for a 4 quart ice cream maker

“meat” of 2 young coconuts
4 cups of water (I assume you can sub 2 cans of coconut milk for the coconut and water)
2 tablespoons of raw cashew butter
1/2 cup agave nectar
7 peaches
1 cup crystallized ginger, chopped
vanilla or almond extract, if desired

Puree all ingredients, except ginger, in batches. Stir together in a big bowl. Chill for 1 hour. Add in ginger chunks, and put in ice cream maker and follow instructions.

Life played a funny trick on me. I've studied nutrition for years, and much to my surprise, found out that I could manage many of my health issues via diet. I've been GF for years, and I've got a bunch of allergies and sensitivities. But it definitely doesn't keep me from cooking, baking and enjoying my food. Thanks for stopping by.
View all posts by Cheryl Harris →
This entry was posted in dessert, go ahead honey, recipe, side dish, weekend herb blogging and tagged corn free, dairy free, egg free, gluten free, grain free, low glycemic, soy free, vegan. Bookmark the permalink.

5 Responses to Peaches and spice and all things yum…