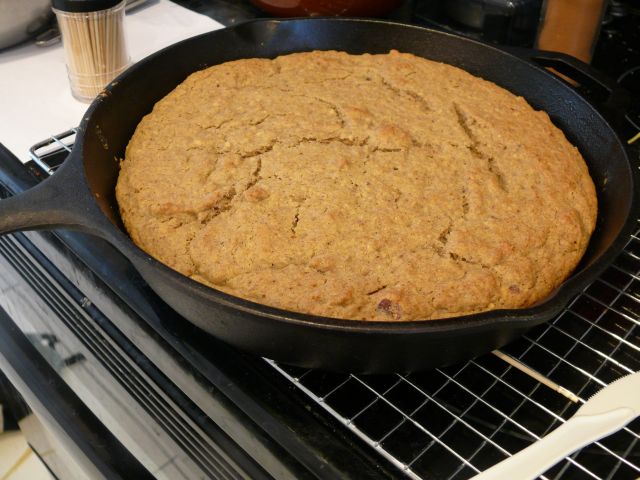 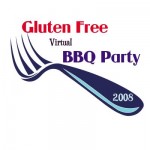 By the time I got to stop by Kate’s Virtual BBQ Party, most of the letters, (aside from q and z, I think) were taken. So I figured I that N would work, although in the past, I’ve called this my lazy day skillet bread.

I thoroughly love this recipe. It’s not a traditional banana bread, and it’s not a cake, per se, I suppose it’s best compared to a cornbread. I tend to make things that pop up in my head, and then try to figure out how to explain it. Generally, if someone asks what something is, I tell them to taste it and figure it out that way! I’ve had it for brunch, as a snack, as a dessert with chocolate chips, and it could be used (sans nuts) with chili instead or as a side for, say, a BBQ!

Once upon a time, I wanted a snack cake…but I didn’t have time and I was really tired. So I figured 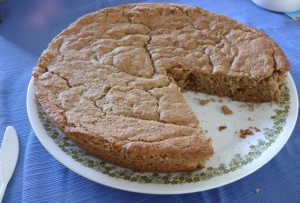 that perhaps I could dump everything in the Vitamix and all would be well. Fortunately, that’s what happened, and this has become one of my quick/easy recipes. It’s easy, delicious, and just comfort food for me. Most times when I make something, I try to figure out what to change next time and how to spice it up. But I actually like this one exactly as is.

I wanted something with a banana flavor, but lower sugar and no eggs or soy, and something I could just pick up and eat, too. That’s a tall order! Through trial and error I came up with a cake I liked, but wanted a brown crisp crust, and so this became a skillet cake. You can make it in a regular 9 inch cake pan, though. This recipe is also totally versatile, and I’ve halved it and put it in a 7 inch dish, which works, too.

You can do all teff, all sorghum, or a combo. If you can get your hands on mesquite, do! Not only is it super high in fiber, but it has caramel-ly taste.

Grease a 10 inch cast iron skillet with coconut oil. Preheat oven to 350.
Thoroughly mix dry ingredients together. Dump wet ingredients (not water) in a blender. Let it roll until well blended. In my vitamix, that takes less than a minute. I would assume an ordinary blender would take a few minutes. Add wet, including water,  to dry, mix until well everything is well combined, but don’t overmix (i.e. no more dry stuff, but no need for a workout)

Bake for 30 minutes or until top turns a beautiful golden brown. Cool on a drying rack 5 minute, then turn out.

Life played a funny trick on me. I've studied nutrition for years, and much to my surprise, found out that I could manage many of my health issues via diet. I've been GF for years, and I've got a bunch of allergies and sensitivities. But it definitely doesn't keep me from cooking, baking and enjoying my food. Thanks for stopping by.
View all posts by Cheryl Harris →
This entry was posted in baked goods, bread, dessert, recipe, side dish and tagged corn free, dairy free, egg free, gluten free, soy free, sugar free, vegan. Bookmark the permalink.