An Adoption and an Adaption: Diet, Dessert and Dogs 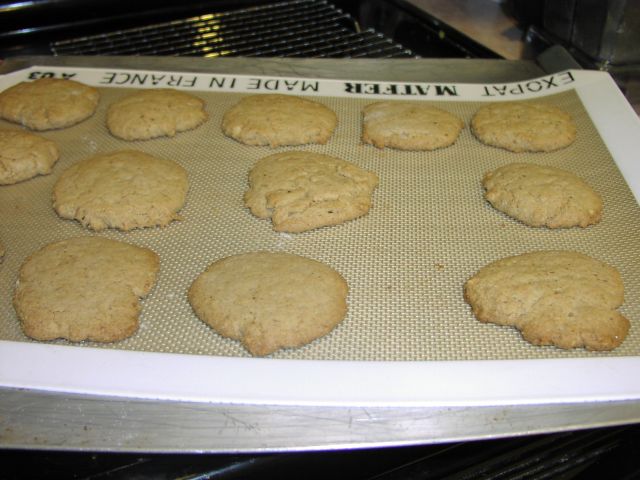 I decided to adopt Ricki, and her (not so) little dogs, too, because I like her philosophy toward real, unprocessed foods and avoiding processed sugars.  She’s creative and not afraid to go out on a limb.  All of her recipes are even dairy free and vegan! Though she uses a lot of whole grains in her cooking, not all recipes are GF, but she does have a tag for GF recipes so they’re easy to find. A requirement for adoptions is to make a recipe as-is, or pretty close. With all of my restrictions, that’s easier said than done! So for the adoption, I made Ricki’s Spicy Cauliflower Soup. But I have also been on a huge baking kick lately, so I adapted her Maple Walnut Cookies to be GF with the following changes:

I planned on using teff because I like the flavor and it’s quite a bit more nutritious than brown rice, but I’ve been on a baking binge lately and so I was out!  I might also try unroasted (light) buckwheat flour, or add in a pinch of mesquite.  Ya know, just for the sake of scientific experimentation.

They were delightful and cooked up beautifully! I will certainly make these again and play with variations.  Flax is very healthy, and I often avoid taking it because I’m not crazy about the taste.  These will give me good incentive 😆

One thing, though…since you GF bloggers out there all seem to be getting pregnant, recommendations are to eat no more than 2 Tablespoons a day of flax seeds while pregnant.  So you can eat half a batch, but not  the whole thing!  At least not in one day. 😎 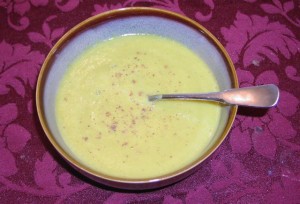 Summer time isn’t usually soup time, but I love soup.  It’s just so comforting and soothing, even when it’s 90 degrees out (or 93, I think, but who’s counting!).  The spices are a lovely mix.  I made it according to the recipe, but put in cauli stem instead of potato because *sigh* no potatoes for me, and used almond milk instead of soy.  I also have some in my freezer for the next rainy day!  I’m sure this will be a regular in our rotation in winter months.

Due to camera issues, I made the soup twice.  It ended up being a very good thing, because when I have a tummy ache, blended soups are the perfect thing.  The second time around, I blended in a few overripe apricots and the gave a subtle sweetness, and I added a little ground nutmeg on top.  I can’t wait to explore the different ways to enjoy Ricki’s soup!

So, check out Ricki’s blog.  Her recipes are great, and the stories are always entertaining.  And the doggies are too cute for words, too.

This post will be part of the Adopt a GF Blogger round up.  I’m hosting, which is why I wanted to make sure to post it on time!  Adopt a GF blogger is the “baby” of Seamaiden of Book of Yum.  If you want to adopt someone, you still have time!  Just email me or put it in the comments, and post by August 11th.

Life played a funny trick on me. I've studied nutrition for years, and much to my surprise, found out that I could manage many of my health issues via diet. I've been GF for years, and I've got a bunch of allergies and sensitivities. But it definitely doesn't keep me from cooking, baking and enjoying my food. Thanks for stopping by.
View all posts by Cheryl Harris →
This entry was posted in adopt a gf blogger, dessert, recipe and tagged corn free, dairy free, egg free, gluten free, soy free. Bookmark the permalink.

4 Responses to An Adoption and an Adaption: Diet, Dessert and Dogs