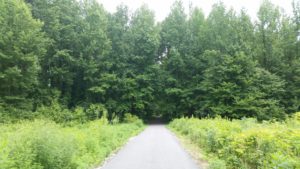 Like so many people, Charlottesville has left me feeling sick, scared, and very, very sad.

Afraid for this country in a way that I never have before, and deeply discouraged.

I wanted to share my grandmother’s story, because it’s more important than ever.

In the 1930s, Nazi sentiment affected many countries around the world, including Iraq. There weren’t Nazis per se, but “just” people who believed that Jews should die because they were taking the jobs, money, etc. Yes, there were once Jews living peacefully in Iraq—many people have never heard of them because Iraqi Jews no longer exist.  In the 1940s, there was an outbreak of violence, known as the Farhud, and it simply was no longer safe to be a Jew in Iraq.

Savta (Bela) lived outside of Bagdad in a very wealthy Jewish family. She had two babies, and by the early 1950s, the danger was so great that she fled with my grandfather, father, and uncle. They lost all their money and possessions. Someone at the border tore up her wedding photo out of spite.

My family members fled anywhere that would take them: Israel, Canada, Australia, England. Eventually, many did come to the US.

My grandmother never stopped grieving the loss. As she got older and had issues with dementia, she would get in loops of repeating the same thing again and again. And her upset was not at the mobs who hated the Jews, or losing her house nor her comfortable lifestyle.

She never got over the abandonment by her neighbors who were once her friends.

They did nothing to protect her.

They once would celebrate each other’s holidays, and eat together, and they did nothing to help her.

50 years later, she still felt the pain of good people doing nothing.

Yes, white supremacists and Nazis are a problem, but that’s just a piece of it. It’s all of the people who harbor hate, and all those who turn a deaf ear because their (tush) is not on the line.

There’s so much talk, and labeling people alt right, alt left, and a lot of name calling. I can admit that it feels good in the moment, but I also suspect it’s counterproductive.

In terms of promoting a healthy society, the people who will make the most difference are likely those “good people” who voted for 45 and still defend him. It’s the people who want their “history”–their statues and monuments, the people who are saying that our current leader represents jobs and growth. Most people hate admitting they are wrong, and calling them Nazis causes them to double down on their commitment to El Naranja. Alienating those people is going to push our country in a (more) dangerous direction.

Like so many, I do not know what to do, and I do not have any of the answers. I’m grieving that history is repeating itself, and I don’t want to be one of Savta’s neighbors. All I can do is donate money, practice kindness, and see where I can be a tiny voice sending support all of the many people who are vulnerable now.

I am so sorry for all of the suffering around us right now.