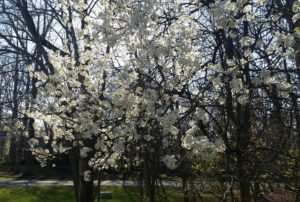 April is IBS awareness month, and for way too many of my years, I’ve been entirely too aware of IBS. You could say it owned me for parts of the past decade. I know many of you can relate.

So here’s my story and a few thoughts on IBS—and this applies to other digestive disorders, too.

In 2003, I started having massive digestive issues. It actually began around Easter, and I remember this distinctly, because I couldn’t manage to stomach my favorite candy eggs. I was in the bathroom 20+ times a day, and I was physically and emotionally wrecked. I lost 40 pounds, 30 in one month. I didn’t think that was physiologically possible, but indeed it was.

At that point, I was already a nutritionist, running the breastfeeding programs for DC WIC and didn’t have a clue about digestive disorders. Neither did the gastroenterologist I was seeing, apparently. He did an endoscopy (no biopsies) and a colonoscopy, and told me that since I was a dietitian I should figure it out.

In desperation, I saw a wide range of practitioners. I spent a whole lot of money, did a whole lot of tests, and not much useful happened. Lots of people told me to go on antidepressants. On a lark I went gluten-free and I was pretty immediately less miserable. It helped my digestion a bit, but the biggest change was in my fatigue, balance and stability and overall pain levels.

Over many, many years and gobs of trial and error, I’ve found the foods that fit me and those that didn’t. Getting diagnosed with SIBO really did wonders for my digestion. This happened first in 2005, then I had a re occurrence in 2010. And for many years I’ve been great without any issues. However, thanks to a recurrent dental issue needing gobs of antibiotics, I’m unfortunately staring down round 3 of SIBO.

There’s a lot you can do for yourself. Anyone who says diet doesn’t help digestive disorders needs to update their medical reading. There’s good data on low FODMAP for IBS and IBD, SCD for IBD (I have a paper on it coming in June!) and…you know, different things work for different people. Sometimes it’s FODMAPs, sometimes grains, sometimes meat, sometimes fatty foods…we may all have different irritants.  Mindfulness can be a huge help for digestive and other pain, and so can physical activity and overall self-care.

Listen to your doctors and health care team…but not too much. Lots of doctors said I wouldn’t walk again—I can now, even if not perfectly. All the docs I consulted said PCOS is lifelong and only treatable by medication, and my levels have normalized for more than a decade without meds. I had a Sjogrens’ flare in 2011 and was told I’d have to learn to live with the symptoms, but (knock on wood) those symptoms have been gone for the last 5 years.  I do take the input of my health care team seriously, but I do my best not be limited by their expectations. I’m only interested in working with people who will help me try to get to my best and healthiest self.

And lastly—none of us have total control over our genes and bodies. The idea that our actions influence our health is really empowering and also very accurate. The flip side of that is falling into the idea that if we’ve got illnesses it’s a personal failing or flaw, and if we just work harder, everything will be perfect. So the wholesome message that we can influence our health can be distorted into a really destructive message of pain and body shame.

I think it’s important to talk about stories of hope. I can’t count the number of times people come to see me and say, I have *fill in the blank* (IBS, gastroparesis, SIBO, etc.) but no one ever gets better. That’s just not true! and it’s a sad and limiting message to hear.

If you’re interested in sharing your journey to a happier tummy, check out posts #IBelieveinyourStory from Kate Scarlata.