I usually don’t weigh in on the pros and cons of the Paleo diet, because what I’ve found over time is that holding a nuanced opinion usually succeeds only in making most people angry. But since it’s snowing and I’m getting my slides ready for an upcoming webinar on eating Gluten-free and Healthy on March 18, 2015 I decided to post my annual research romp on grain-free diets. For the record, I don’t think I have a “side”. My job is in figuring out what’s best for each individual.

Proponents of the Paleo often really loudly proclaim that there’s a ton of science out there, and I’ve seen more than a few imply that it’s naïve to think otherwise. On the other hand, many quickly dismiss a grain-free diet as inevitably always harmful. As a research geek, I got curious. After a few Medline searches, and (excluding one study on pigs and another on satiety of a Paleo diet) I could only find 7 studies in total that examined a Paleo or Paleo-ish diet. 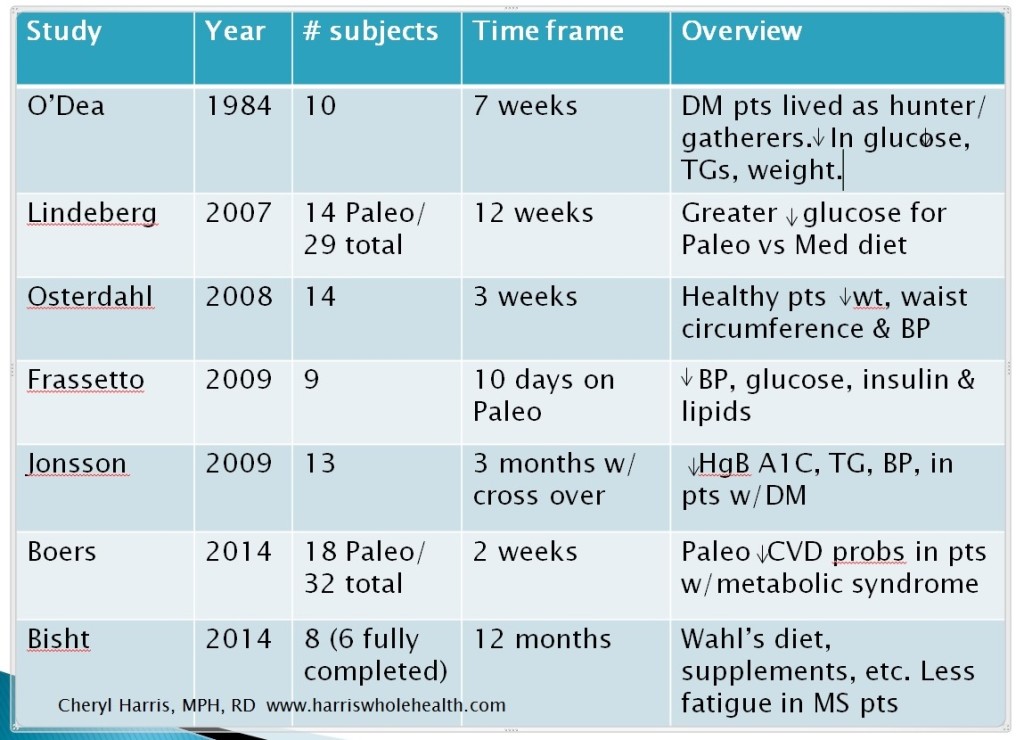 If you’re used to looking at research, a few things jump out:

Only having a few studies doesn’t mean something can’t or won’t work. It just means we don’t know much yet. It also doesn’t mean that you, as a human being, need to wait for science to validate your own observations. But the lack of robust research does keep nutrition recommendations from changing.

I’m all for people eating less sugar, soda, processed foods and empty carbs. I’d be hard pressed to find reasons to push a Twinkie on anyone. There’s lot of benefit in eating more veggies and fruit, and cutting way back on the fast food, and zero risk.

As for including beans or grains, from everything I’ve observed with clients, the impact on health is largely individual. There’s a goofy number of studies showing health benefits of beans and grains broadly, but again, they don’t examine a low sugar, unprocessed diet with and without beans and whole grains, and that’s the big question here.

Love to hear your thoughts! And please, only polite comments.