I am a pretty private person, and generally fly under the radar when possible (unless chocolate is involved). But there are times when it’s simply wrong to be silent and so…please help me urge the U.S. to return stolen religious and family artifacts to the Iraqi Jewish community.

Imagine family treasures that were stolen from you, your parents and grandparents were found, only to have them returned not to your family, but to the country that stole them.

My father was born outside of Baghdad, into a community of Iraqi Jews. Once there were 130,000 Jews in Iraq, now there are just 5 elderly Jews. FIVE. There were years of brutal persecution and executions, and along the way, religious and personal belongings were looted, seized and stolen from families including my own.

In 2003, these items were found by U.S. soldiers floating in a basement in one of Saddam’s palaces. The U.S. National Archives stepped in to preserve these treasures—everything from religious artifacts, some dating to the 16th century, to personal belongings from the seized in the 1950s and afterwards, family bibles, pictures and even school records.

On one hand, that’s great news. But after they’re displayed in DC, these items are headed back to Iraq. The Iraqi government claims they own these items. Of course, Iraqi Jews would be entirely denied physical access there. 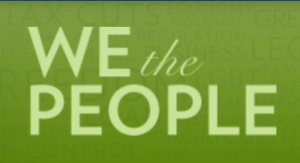 Wounds run deep any time a community is violently displaced, and they can hurt for generations.  It’s simply wrong, and returning stolen goods to Iraq adds an extra layer of insult and indignity to a community all but wiped out of existence.

Iraqi Jewish communities saved these sacred items for hundreds of years because they mattered and were/are considered of great worth on so many levels.  This isn’t just “stuff”. For me, it’s honoring my ancestors, preserving cultural heritage for my nephews, and paying respect to those who were killed simply because of their religious views, and so many similar situations of genocide and displacement around the globe. It’s a symbolic and literal reclaiming and it personally matters deeply to me.

So please help me. I started a petition on WhiteHouse.gov, and it needs 100,000 signatures in just 30 days...that’s a huge number.

In the words of Dr. Seuss:

“Unless someone like you cares a whole awful lot,
Nothing is going to get better. It’s not.”

Of course, I deeply appreciate the World Organization for Iraqi Jews for their ongoing diplomatic efforts, the U.S. troops for finding these treasures and the U.S. National Archives for their amazing work preserving these documents.

For more information, please this Op Ed from the New York Times

Many of these items are on display at the National Archives in DC now.