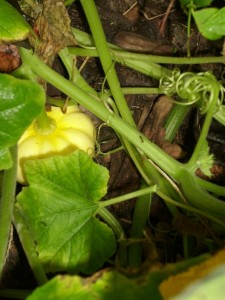 I must confess my prejudice. I just don’t really like big fat pumpkins, unless I’m carving them.  The little ones are much cuter, and much less of a hassle to grow. 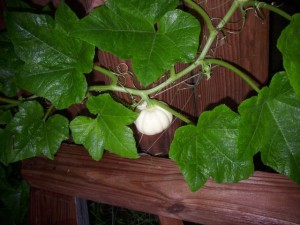 And I am so grateful for my pumpkins!  We moved here smack in the middle of growing season, and I could not convince DH that the very first priority when we moved was to establish a garden bed.  So by the time we settled in, pumpkins were one of the few things we could still start from seed and harvest.

Every year, I delight in watching them grow from the tiniest little baby pumpkin to the…well, tiny adult pumpkin.  I don’t know why it’s more fun than any other thing to grow for me, but I get such a kick out of it.  There are a few left on the vine, but

the plant is much less happy so we’ll see how many more we get.  Right now, we’re at 12 and counting, so absolutely no complaints here!  There are 3-4 that will most likely make it and a few maybes, but I’ve learned my lesson about counting my pumpkins before they ‘hatch’

What about eating pumpkins, you say?  Well, of course they’re wonderful sources of vitamin A.  And regretfully, I can’t eat them at all.  I CAN eat pumpkin seeds…no clue why.   But hopefully having them as a theme will help folks plan ahead for the month or so of pumpkin goodness to come…

It’s also the season to announce a change!  Over the next month or so, Heather of Celiac Family will take over coordination of Menu Plan Monday.  More details to follow!

Lots of menu plans around the web!

We’ve got Kerry Ann of Cooking Traditional foods, who has a GFCF menu planned.  This is her first menu plan Monday so head over and give her some love!  Her blog is on traditional cooking and she’s got some fun recipes in the lineup, like peanut butter fudge and lentil dahl.

Heather of Celiac Family has a pictoral menu plan, which is always fun.  Not only does she have pumpkin waffles on the menu, she’s got pumpkin chocolate chip muffins, too!  And here’s to hoping her family stays healthy.

Alta of Tasty Eats at Home will be teaching at the GF & Allergen Free Cooking Expo, so if you’ll be there, make sure to look for her classes.  She’s got some pumpkin on the lineup as part of a souffle topping and she even has beef heart…I’m way too chicken for anything like that!

Amanda of Gluten-Free Detroit Metro is back to work, and that’s certainly a challenge while makings sure a (gluten-free) dinner is on the table.  She’s looking for inspiration for broccoli, spinach and green bean recipes.  Thoughts?

Angela of Angela’s kitchen always has the cutest menu icons, and she is indeed the pumpkin QUEEN!  I think the pumpkin streusel bars sound best to me.

Emily of Our Frugal Happy Life is grilling a lot this week, and it’s her hubby’s golden birthday, too.  Pretty neat!