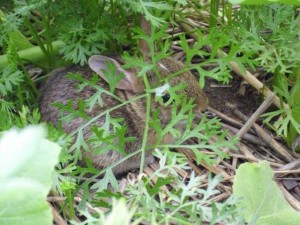 Look who’s been growing in my garden. Isn’t he a cutie pie?

It’s been a tasty

week or so and I’ve been having a lot of fun playing in the kitchen.  However, with the weather as it is, everything melts.  Like these lovelies, for instance. They were intact at home, and then…melted on the car ride, ending up on the seats of my new car, in a corner of the box, you get the general idea.  *sigh*.  But they were tasty…

Our weekly host is Scrumptious, of In my Box and her ingredient is beans, and I couldn’t be happier.  I LOVE beans, and I’ve been able to slowly eat more of them without causing my tummy to be unhappier than usual, which is just fabulous.  As of late, I’ve been using beans as a thickener in desserts, especially chocolate frosting! but I haven’t been very good about writing down amounts, so I don’t have recipes to share.  Yet.

My garden is doing well, we’ve got gobs of tomatoes and herbs, and the rest is…at its own pace.