A romp through my kitchen… 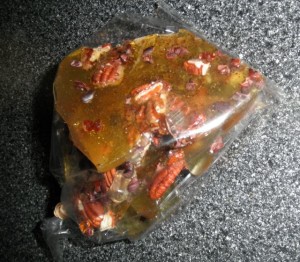 I’ve been baking. And cooking. Honest! I just haven’t been posting as much. Generally I try to make a new recipe a few times to make sure it works, and, well, even as much as I love something, I’m generally not motivated to make a bunch of batches in a row.

But I have been making a gob of fun stuff: 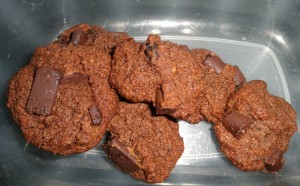 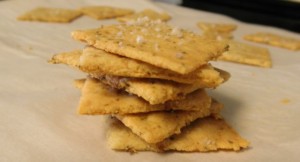 Normal people say “thank you”. Bakers say, hey, why don’t I make cookies, brittle and choc covered orange slices and send them as a gift? Pretty please tell me I’m not the only one. So I made Double Choc Cherry Cookies from The Gluten-Free Almond Flour Cookbook,  Pecan and Cacao Nib brittle and Choc dipped candied orange peels, because the recipient is gluten, dairy and egg free.

Paleo, vegan almond crackers from Carrie’s new cookbook, the Everything Gluten-Free Baking Cookbook which will be out soon. I really, really like these. They’re really rich, satisfying and delicious.

Shirley’s Crustless Apple Pie was absolutely fantastic. I made it with a chia egg, less oil and maple sugar and it was simply delicious. The topping was like buttah–rich, delicious and EASY. I brought it to a family gathering and the next I knew, my aunt was handing me an empty pie plate. I had been angling for a second piece…alas.

Shirley’s Crustless Chocolate Fudge AKA Clark Kent Pie was also in the lineup. As you’ll notice, I do have a pathological need to deviate from recipes. And I couldn’t find the 1/4 cup measure, so I used 1/3 cup cocoa and adding in 1TBSP of liquor. It worked with Irish creme and with Frangelico…so my bet it would work with whatever booze de jour you’d enjoy. But Shirley’s warning about it being so rich you only need a tiny piece? Not so much. Mr. Dude was rather efficient at polishing off a big chunk of the pie with great gusto.

And Ooh Ooh looky here! I made my first (successful) batch of sauerkraut! Okay, I understand that’s easy to do. But I have an extreme phobia of mold (and that isn’t in any way, shape or form an exaggeration. Mold sends me screaming and I tend to drop the moldy thing in question. My poor college roommate and E have been so patient with me.) So whenever I’d read a recipe and they’d say, don’t worry, mold is n 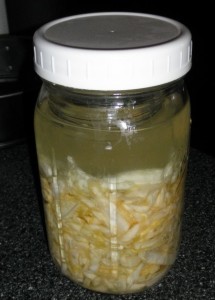 ormal, just scoop it out, my eyes would bug out of my head and that would be it. But I finally did it. The first batch went terribly wrong, but this was delish!

5 Responses to A romp through my kitchen…