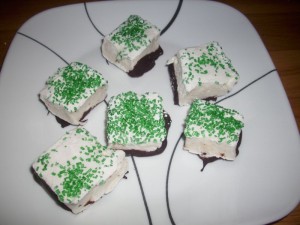 Irony: noun \ˈī-rə-nē also ˈī(-ə)r-nē\ : Posting on My 3 Nutrition Guidelines and the value of limiting processed sugar and then following it with a post on homemade marshmallows

I love making candy.  I don’t know why.  I don’t really eat candy (well, at least not regular sugar based candy, although I do indulge in some of the healthier kinds, like my Bittersweet chocolate fudge or chocolate covered Pom seeds), but I confess, making the “real stuff” is a blast!  I indulge my inner-candy maker a few times a year.  I made Candy Cane Marshmallows for Christmas and DH got very pouty because I brought them to work after he’d had only a few.  So I promised another batch, and it’s taken me until now to honor it!

The recipe I used is a modified form of this from Martha Stewart, heavily weighing on the 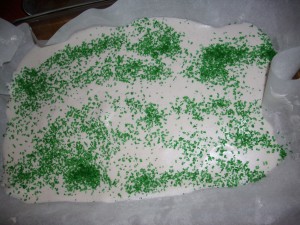 substitutions from the comment sections and making good use of some vanilla bean, with  almond a coconut varieties, and dipping the feet in bittersweet, semisweet and milk chocolate.  I know, I know, excessive-much.

It’s certainly fun to do if you’re still hankering for a St. Patty’s day adventure…

Life played a funny trick on me. I've studied nutrition for years, and much to my surprise, found out that I could manage many of my health issues via diet. I've been GF for years, and I've got a bunch of allergies and sensitivities. But it definitely doesn't keep me from cooking, baking and enjoying my food. Thanks for stopping by.
View all posts by Cheryl Harris →
This entry was posted in dessert. Bookmark the permalink.